Gear Up for Halloween with These Spooky Slots 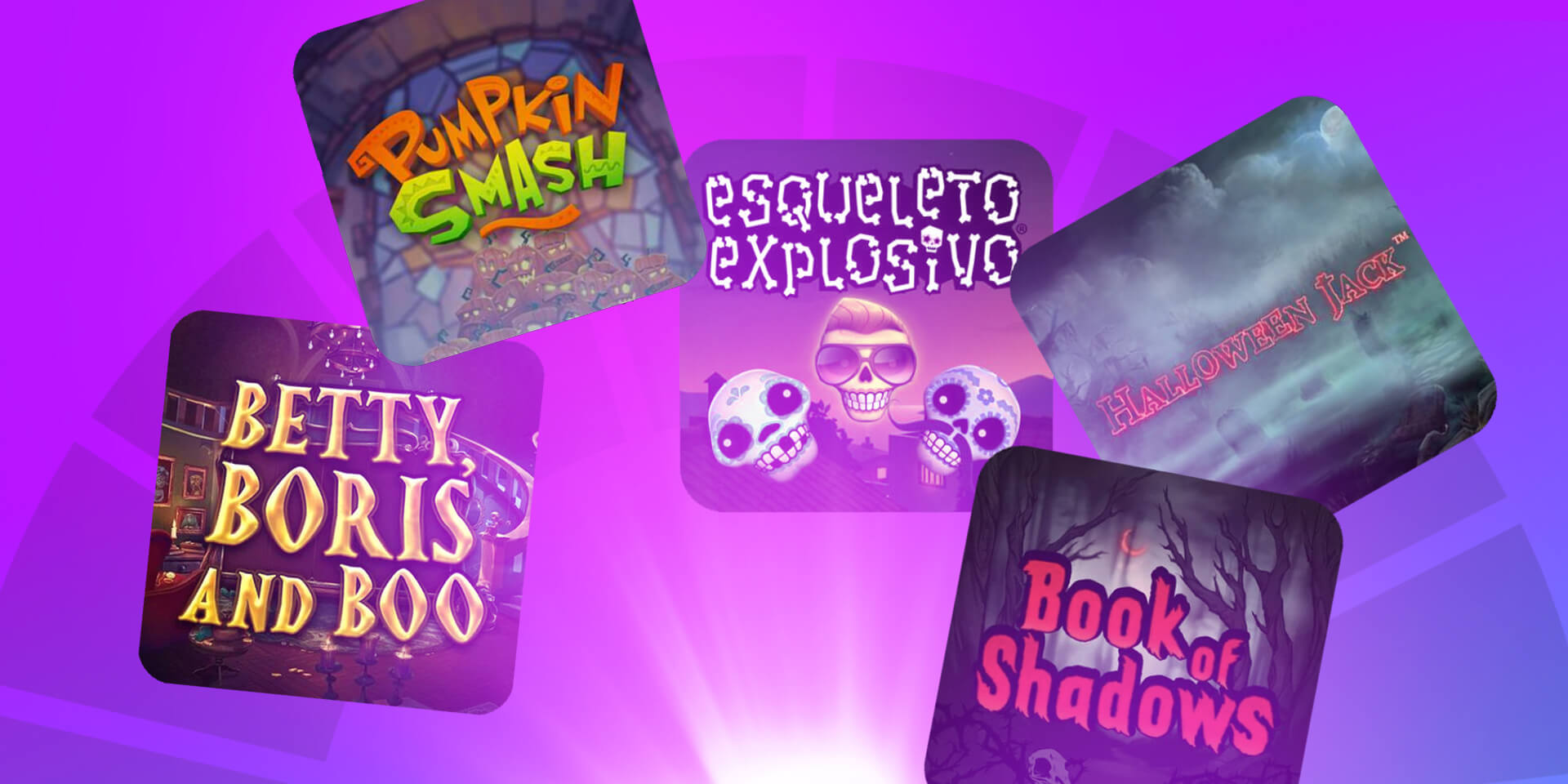 It's almost that time of year again. That time when pumpkins are carved, tricks or treats dished out, creepy costumes donned and people everywhere embrace their darker side.

To help you get into the spirit of pumpkin season this year we've compiled a rundown of the best Halloween slots available to play at Wheelz Casino. 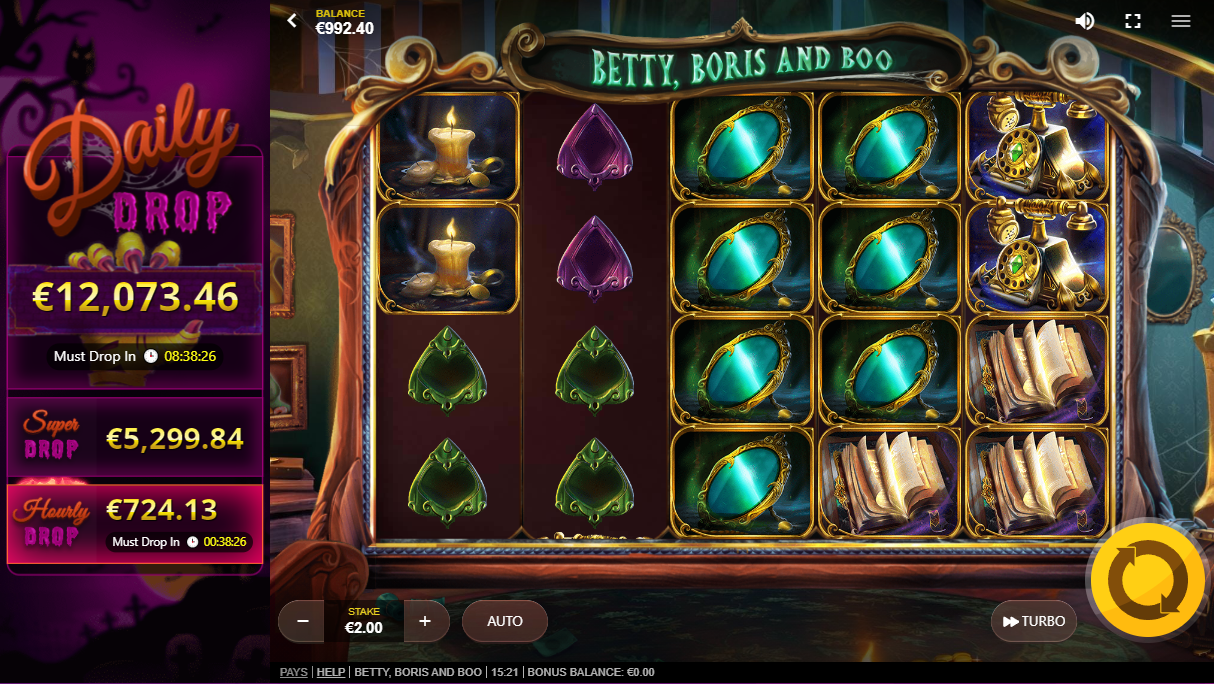 Red Tiger Gaming kick off our compilation with Betty, Boris and Boo, a game that invites players to step inside a haunted house to join a trio of mischievous ghosts, intent on stirring up some spooky slot fun.

Played using 5 reels and 30 paylines, Spooky Spins is the standout feature in Betty Boris and Boo, granting 10 Free Spins that come with 3 separate modifiers - one for each central character.

Boo adds multipliers to winning combos, Betty conjures up sticky wilds on occasion, while Boris may step in to supersize symbols into blocks 4x4 in size. Land all 3 modifiers simultaneously and watch the coins fly this Halloween! 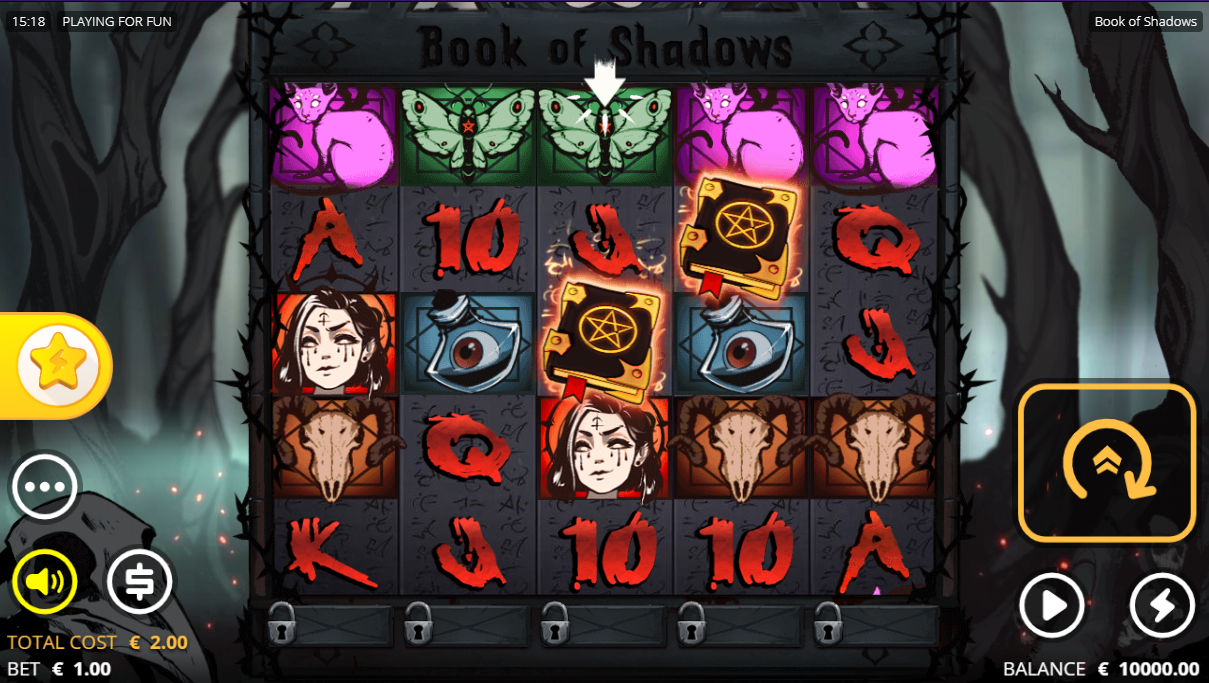 Next up are high flyers Nolimit City with their dark and sinister horror-themed game, Book of Shadows.

Boasting typically polished production, the action goes down on a 5-reel, 3-row panel that can be expanded up to 5 rows high in return for a fee applied to each additional row.

So expect expanding symbols during the Free Spins feature once three scatters have landed, along with several additional extras. Players can gamble any win by selecting a correct card colour, and where offered, there's an option to gain instant access to Free Spins for shelling out the equivalent of 75 times your stake if you don't want to wait around.

It's also possible to lock any number of reels in place after a given spin - especially useful if you've managed to land 2/3 requisite scatters needed to activate Free Spins.

While not categorised as a Halloween slot as such, the game carries a decidedly dark occult-flavoured underbelly and is a must-play for all lovers of Book games, as well as those seeking some highly volatile Halloween slot fun this year! 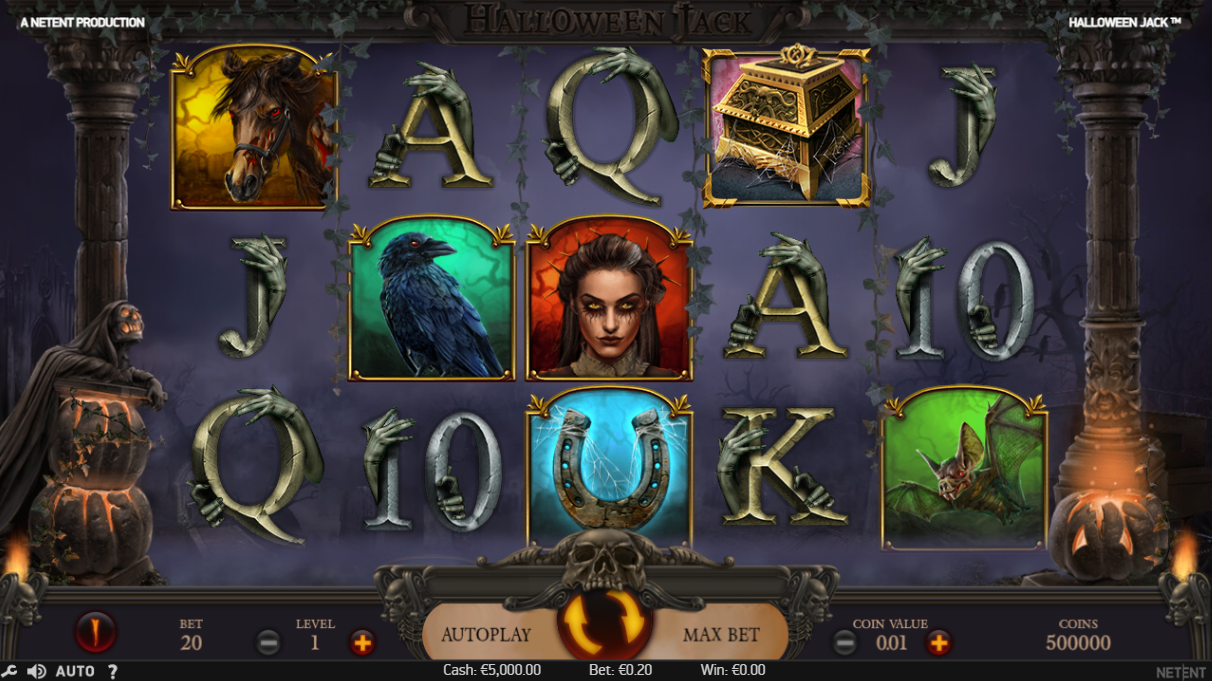 It's time to meet Halloween Jack, the lead role in NetEnt's haunting slot that evokes the dark spirit of Halloween.

Sporting an abundance of thematic paraphernalia including bats, decrepit buildings, creepy crows and demented horses, this is one of the creepier Halloween slots you're likely to encounter. The game pairs a menagerie of features with some excellent graphic work matched by a sinister backing audio. Halloween Jack delivers a veritable sensorial treat and reflects the evident talent of one of the industry's big hitters in NetEnt.

Bonus extras include Halloween Jack Free Spins that kick off with 10 spins where walking wilds play a prominent role. There's also the Jack o'Lector feature, triggered once a lantern lands on reel #5 to bring 3 types of wilds into play.

With a max win worth an impressive 30,000x your bet, Halloween Jack promises an engrossing Halloween slot experience and can be enjoyed right here at Wheelz Casino. 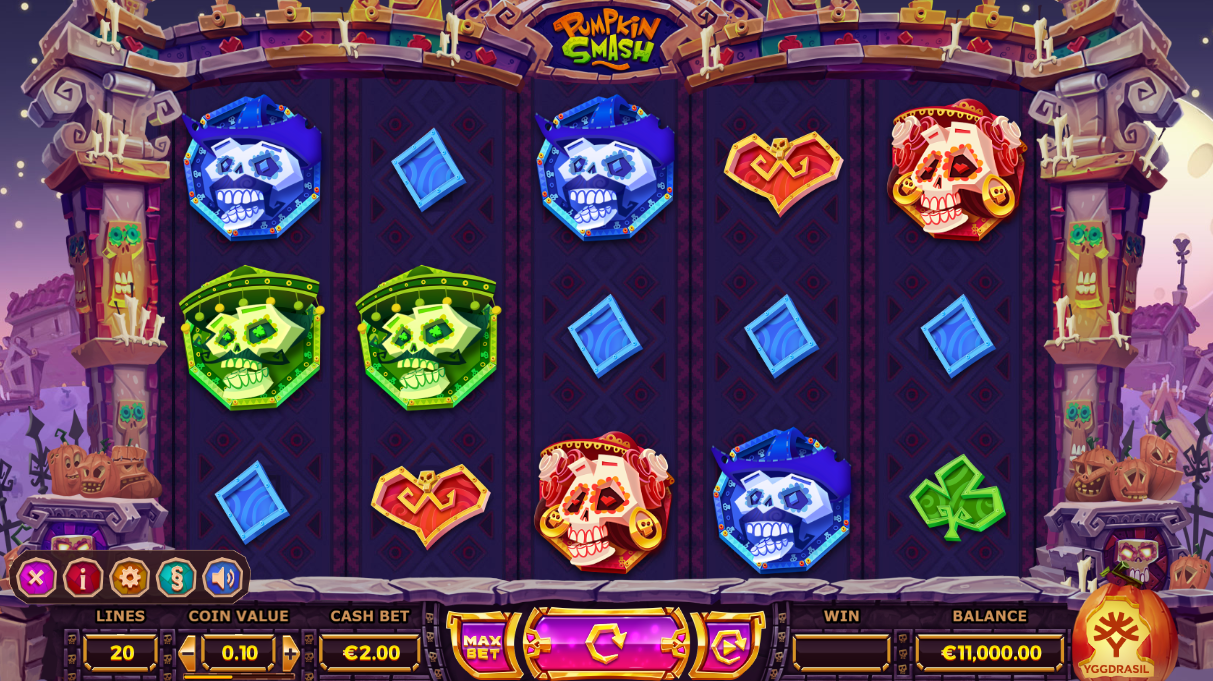 Get ready to smash up seasonal vegetables in Yggdrasil's fun, light-hearted take on the theme.

Inspired by Day of the Dead, or "Dia de los Muertos", Pumpkin Smash comes with a pair of main bonus features.

Make use of the Pumpkin Smash feature which sees players bash up pumpkins to earn one of several treats. There are up to 30 Free Spins in the offing, along with instant prizes topping out at 375x the stake, and multipliers that reach as high as 7x.

Even more rewards lie inside the Free Spins feature. Help yourself to additional Free Spins - up to 16 at most, cash prizes worth a maximum 875 times your bet and single symbol multipliers that can go up to 7x.

Executed in typically superb fashion by Yggdrasil, Pumpkin Smash offers a colourful and quirky addition to the sea of Halloween-themed games. 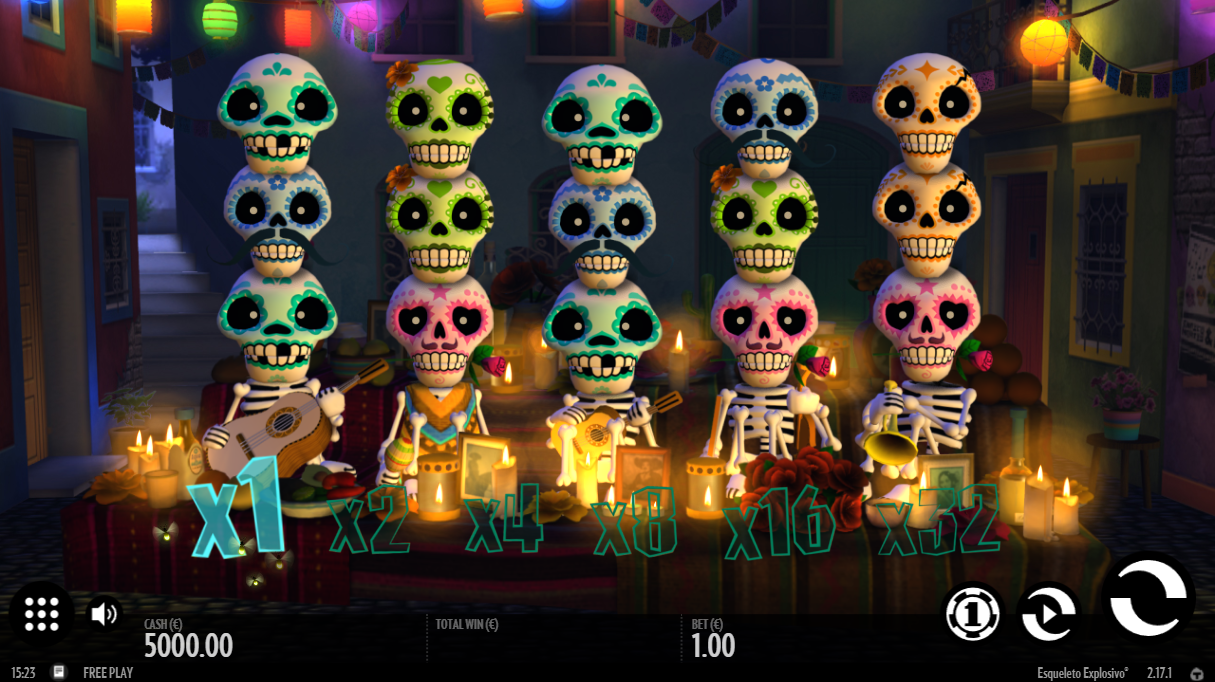 Pumpkin Smash lends a nice segue into our last, but by no means least, inclusion.

We felt it's only right to honour Mexico's celebration of the dead by including a bizarrely brilliant creation from the arty crew at Thunderkick in our list.

Slots from the provider invariably boast the slickest production values, and Esqueleto Explosivo is no exception - dripping in superb illustrations to provide a real visual feast.

Though there is no Free Spins feature, players do get to benefit from exploding wilds and dropping symbols. What's more, multipliers double your bet on each consecutive win all the way up to 32x to compensate for the absence of Free Spins.

Watch as different coloured mariachi skulls sing in harmony upon every win, and revel in the carnival atmosphere enveloping the game. There's even an Elvis Pressley-lookalike to ramp up the surreal factor!

If you can't get enough Day of the Dead action for one year, Thunderkick followed up this game with another crazy, colourful slot that captures the fun of the celebration to fantastic effect.

Titled Esqueleto Explosivo 2, the sequel retains much of the original's infections charm, while throwing in a couple of new features into the mix for a truly one-of-a-kind slot experience.