Check Out These Amazing New Games 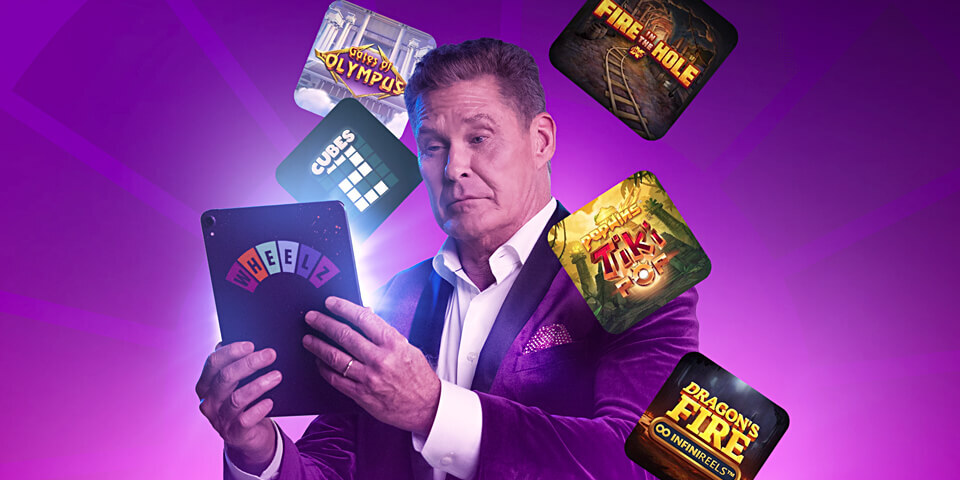 Our casino team is constantly looking to enrich the Wheelz back catalogue with the very latest releases from online casino's star providers.

At last check, we counted well over 1,300 titles themed on everything and anything imaginable. That number continues to swell weekly as we keep up with players' insatiable thirst for the hottest new games.

It's almost three months since we opened for business, which feels the right time to shine a light on some amazing new games for you all to try.

So pack a pick axe, dynamite and your passport as we globetrot across slot land for some high octane slot fun. On the way, get ready to dive deep underground to encounter explosive mineshafts and fire-breathing dragons.

Sound exciting? Then check out our compilation of five recent showstoppers for you all to sample..

First port of call is the celestial Gates of Olympus guarded by an angry-looking Zeus - the most famous Greek God of all occupied with sky and thunder.

Slot's own version of this supreme deity is also capable of dishing up impressive payouts if the mood fits. Get him on your side in this heavenly Pragmatic Play production for the chance to bank up to 5,000x your stake.

Helping you out is the developer's Pay Anywhere engine, which enhances your earning potential considerably. This marks a refreshing departure from the more common payline systems that dominate modern slots.

Pragmatic Play have also bolted on Cascading Reels, Multipliers and the obligatory Free Spins round to make your Olympus voyage as profitable as possible.

Ambitious Malta-based studio Nolimit City continue to tear up the online casino scene with another electrifying slot ready to sample now at Wheelz.

Building on their wildly popular x-themed games, Fire in the Hole xBomb beckons players down into the murky depths of a lucrative mineshaft, which is primed and ready to explode at any moment.

The slot also gives a debut to Nolimit City's latest 'x' mechanic: the xBomb. xBomb Wild symbols step in for all other symbols bar Scatters to help pull wins together. If an xBomb detonates, all adjacent regular symbols vanish, while boosting the Win Multiplier by 1x each time. What's more, xBombs blow up even when they don't form part of a win, further enhancing your prospects.

Consistent with most games in the provider's arsenal, this is one for the brave. Nolimit City keep up their trend of releasing volatile games, with the game scoring high on the variance index. Fire in the Hole is as equally capable of punishing your bankroll as it is exploding into life without warning.

So pack ample ammunition - and patience, if you're serious about tapping the slot's considerable 60,000x max win in what constitutes yet another superbly executed Nolimit City creation.

After that opening salvo it's time to take a breather and dial down the intensity with a game that draws inspiration from the world famous Rubik's cube.

The setting is a world away from heavenly gates and exploding mineshafts, but Cubes 2 ranks no lower in the volatility stakes - rated as 5/5 by its creator.

While Cubes 2 retains the key features from the original - namely 5x5 reel setup, multi-coloured palette and grid play, the slot is embellished with the occasional neat addition second time round.

Whenever winning clusters contain one of the cubes marked 'X' found on each outer corner, the X breaks up into several smaller symbol before a win evaluation multiplied by the 'X' value.

In addition, winning clusters bring the Reel Expansion feature into play. This expands the playing area by enveloping the current reel setup with a new layer of Cubes on each successive spin - maxing out at 11x11 in size.

In the absence of Scatter symbols, Free Spins are earned by spelling out the word 'CUBES' located above the grid. Simply land five successive winning clusters of different colours to make this happen.

Dragon's Fire InfiniReels is the latest to incorporate the patented mechanic from ReelPlay. The system functions by locking the current reels in place following each win, before 1 additional reel is bolted onto the right in readiness for the next spin.

If this new reel contributes to a win on the very next spin, the process then repeats. The reels only reset back to their original 3x3 form if the outermost right reel doesn't improve a win on a subsequent spin.

On top of this, the game is laced with features such as Fire Eggs, Fire Wilds and Free Spins. The former of the three apply a random multiplier value whenever a maximum of 1 shows up during spins, while Fire Wilds substitute for any regular pay symbols mid-spin.

Finally, 10 Dragon Spins are awarded for catching one corresponding symbol each on reels 1, 2 and 3, simultaneously. Prior to the feature, one symbol is randomly chosen to land alongside other special symbols.

Last but by no means least is yet another exciting collaboration between two hugely talented software houses.

PopWins Tiki POP takes players on an intrepid journey to the Pacific Ocean to encounter Tiki-inspired iconography and compelling gameplay.

The game offers 5 reels and 3 rows, expanding up to 5x5 in full flow, along with an explosion of colour and absorbing slot action.

Central to the play is independent developer Avatar UX's patented PopWins mechanic. This aids your cause by splitting up winning symbols to make way for new ones dropping into their vacant positions, for more win opportunities. When this happens, reels grow in height à la MegaWays, albeit offering reduced potential.

What's more, multipliers worth 2x are applied if ever reels reach their full capacity, which also boosts paylines up to 3,125 from the traditional 243 in the process.

Lastly, you can help yourself to a maximum of 15 Free Spins for landing the required number of triggering Scatters in the base game. Free Spins take place on an enlarged playing grid, accompanied by Progressive Multipliers.

There's also a gamble option available for all you risk-takers out there. Take a 50/50 shot to ascend one Level at a time, or take a one-way ticket back to the base game if it goes pear-shaped.

With a max win worth 32,000x your stake, an engrossing theme and riveting gameplay in store, this is an excellent addition to the growing roster of PopWins games.